Where to Fish in the Whitsundays

We'll try and share local tips on where to fish in the Whitsundays; The key word is TRY, those locals like to keep some fishing spots to themselves!

To help those visitors who want to catch a fish or three while cruising the Whitsundays on a bareboat charter, we've created a list of where to fish in the Whitsundays.

The marine environment and coastline of the Whitsunday region are home to a huge variety of pelagic and reef fish. Fishing around the Whitsundays is usually done trolling, around the reefs or from the rocks.

It's not hard to catch a Coral Trout, Sweetlip, Trevally or Tuskfish around the many rocky bottoms and fringing reefs of the Islands. Game fishing for tuna, Marlin and Mackeral are also popular catches around the Islands.

Where to Fish in the Whitsundays

For people who do not have a boat, the most popular fishing locations on the mainland include the Shute Harbour public fishing pontoon, the VMR Rockwall (Whisper Bay) and Cannonvale Beach.

If you have a boat or are on a charter yacht, the best fishing is around the islands. The closest mainland port to the Islands is Shute Harbour; those with a boat can use the boat ramp at the Shute Marine Terminal.

Generally speaking, the headlands or the passages between the islands are excellent places to throw a line in. Rocky outdrops, drop-offs and bommies are good spots to try with fresh bait.

The rocky headlands located around the Daydream Island resort are also great places to try for Giant Trevally and Mackeral.

One of our staff members who is a keen fisherman says he loves fishing at Windy Bay on the northwest of Haselwood Island. The rocky edges on the north side of Haslewood are also good for Trevally.

Mackerel Bay, on the north-east side of Hook Island, is a favourite fishing spot amongst locals.

If you're after Spanish Mackeral, try Minstrel Rocks, around past Pinnacle Point at the top of Hook Island to Dolphin Point.

"The Paddock" is a large body of deep water ideal for game fishing north of Hook and Hayman Island.

The edges of Hook Passage is one of the best fishing spots in the Whitsundays. Fish the shallow flats that extend out from the islands and drop off into the deep.

Try the reef off the southwestern tip of South Molle Island for Mackerel.

Around the southern end of Whitsunday Island’s fringing reefs, you can catch many Sweetlip, Cod, Spangled Emperor, and Coral Trout.

The mouth of Hill Inlet is good for sandflats fishing or fly fishing where you can catch Queenies, Whiting, and a variety of trevally including Golderns (pay attention to the tides).

Try the fridging reef in Apostle Bay, on the North West of Whitsunday Island.

You’ll find Coral Trout in the reef holes and underwater structure around Hayman Island. Try the small channel which separates Hayman and Hook Island on the turning tides, Trevally is also often in the area.

‘The Paddock’, which is the open water just north-east of Hayman and Hook islands is a spot for game fish.

Double Cone Island is a bit out of the way so it’s a great spot to try. Follow the shallow reefs and try to get your lure up near the bommies.

A popular spot for on-shore fishing, with plenty of catches available right off the beach.

Shute Harbour is one of the best fishing spots on the mainland. There's a public fishing pontoon at the Marina Terminal and a boat ramp for small boats wishing to go out to the islands.

Anglers catch giant Trevally within the harbour. Along Shute Harbour towards Long Islands tuna schools are spotted.  Spanish Mackerels bite outside of the Harbour.

The rock walls along the coast at Airlie are great for those who want land-based fishing.  Coral Trout can be caught on the walls near the Sailing Club. The Port of Airlie wall is good for Grunter and Whiting.

Identifying fish in the Whitsundays

Bareboat charter guests will have a copy of 100 Magic Miles on board to help with identifying fish.

There are a few fishes in Queensland which are poisonous and should not be eaten: 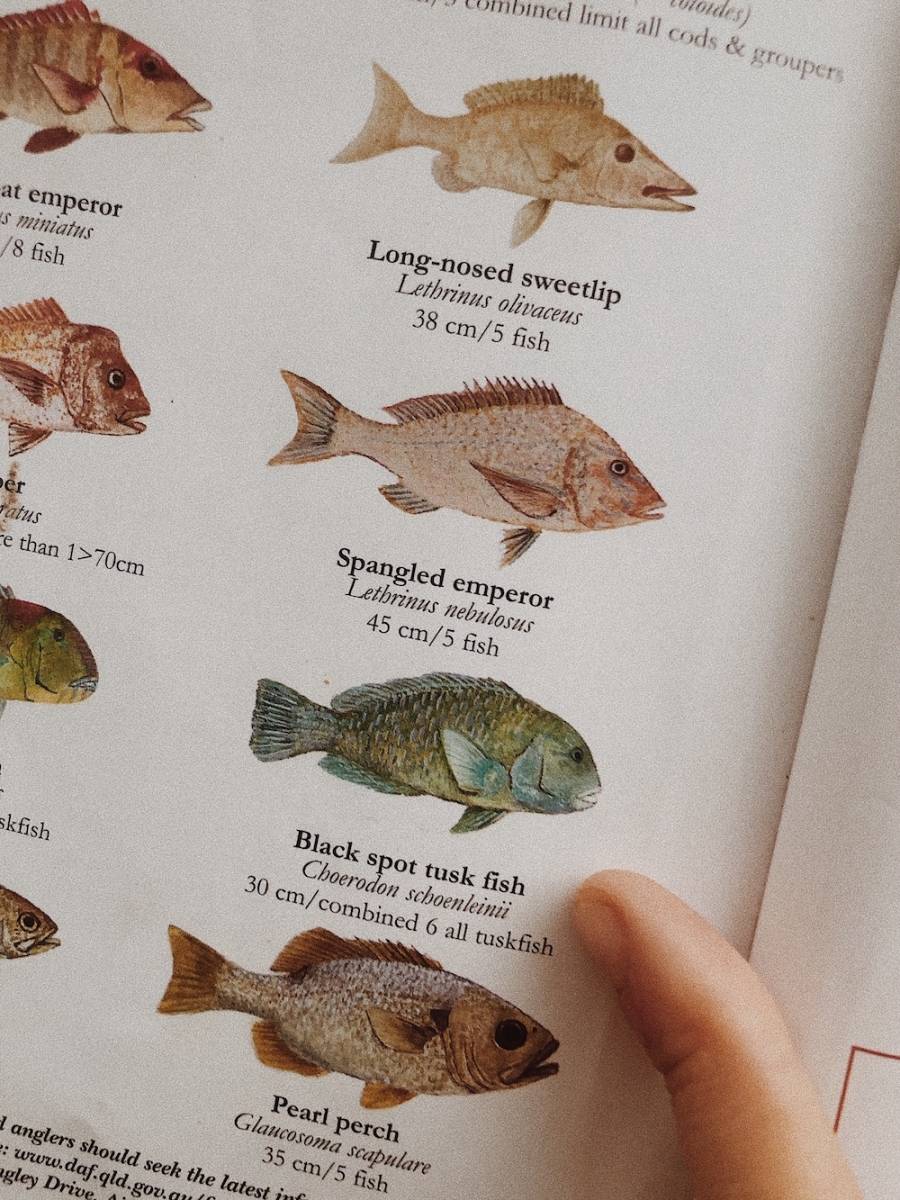 Understanding the fishing zones in the Whitsundays Before you wet a line, it’s important to know where you can fish and where the protected zones are within the Great Barrier Reef Marine Park.

There are three zones charterers fishing by line (rod and reel, or handline) can fish within the marine park. These are the General Use Zone, the Habitat Protection Zone and the Conservation Park Zone.

Zones are subject to specific terms, enforced by the Great Barrier Reef Marine Park Authority. General Use and Habitat Protection zones are limited to a maximum of three lines per person, with a combined six hooks per person. The Conservation Park Zone is limited to one line and hook per person.

Those on a bareboat charter will have a copy of the zoning maps onboard their vessels.

Can you fish at Whitehaven Beach?

No, you can't fish at Whitehaven Beach. It's a green zone meaning fishing is prohibited all year round.

Please note, if you're planning your bareboat charter around fishing opportunities, there are two nine-day periods that ban the taking of coral fish in the spawning period. Bans occur in October, November and December each year around the ‘new moon” period.

Mooring and Anchoring in the Whitsundays

It's important where you can anchor and moor in the Whitsundays so that the reef remains protected. Always pick up a mooring when they are available, they have been placed in areas where the reef is fragile. If you need to anchor, do so on a sand bottom rather than over a reef. 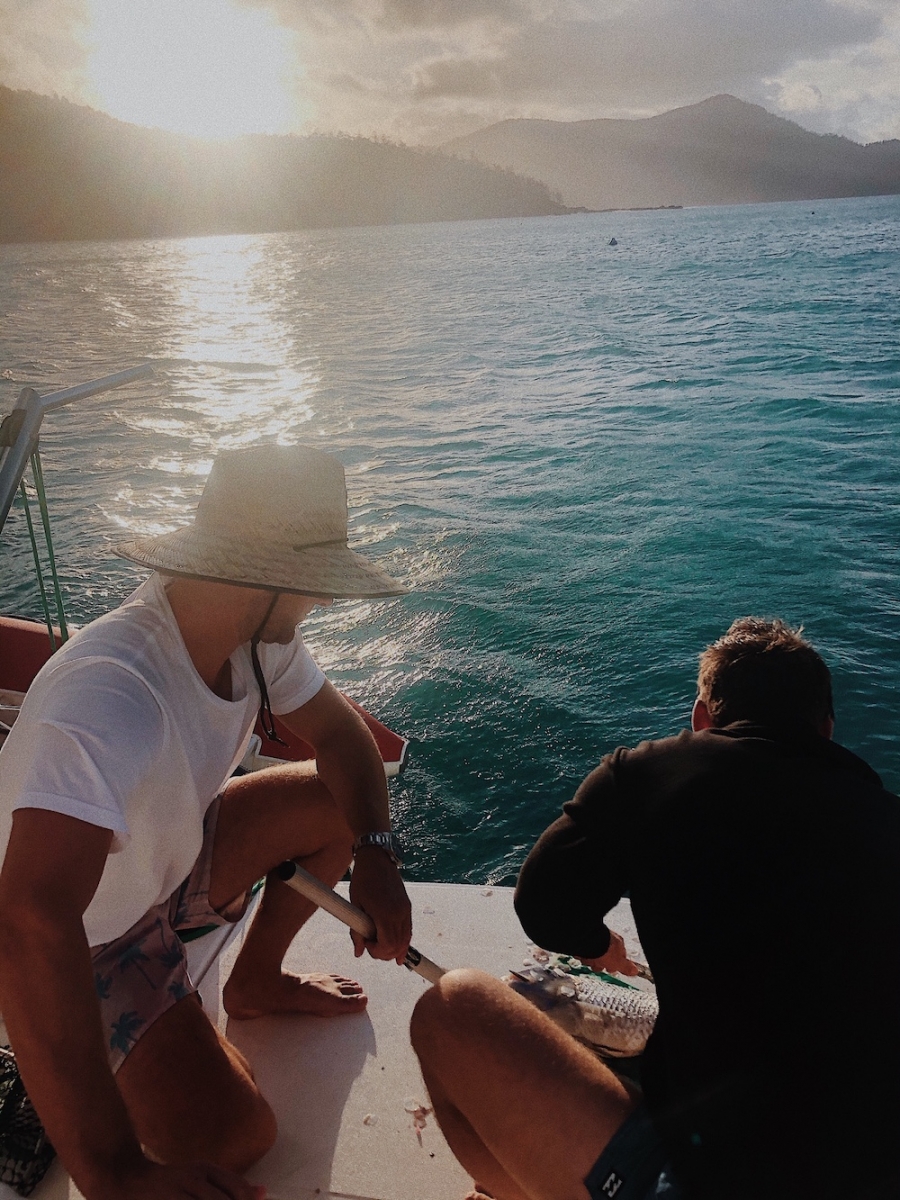