You can help to conserve and protect the Great Barrier Reef by moving beyond the negative press and doing one simple thing.

In a time when global warming is changing our Australian landscape, affecting the Great Barrier Reef and burning our beloved bush, it's easy to feel helpless and overwhelmed. We watch our news in horror, we share social posts which align with our views, we donate and we look at who or what is to blame for the destruction. And, most of us wonder, what more can I do?

Negative media coverage and hysteria can be a big issue. Firstly, too much bad news can be polarising and it makes us feel so overwhelmed we shut down. And secondly, if the public is told that an environment or place is in its death throes, people are less likely to visit, compounding the problem further.

In this post, we will talk about media coverage of the Great Barrier Reef, the main thing you can do to help support the Reef and how the Whitsundays have fared through recent environmental challenges.

Negative press is not helping the Reef

When it comes to our local treasure and one of Australia's top landmarks, The Great Barrier Reef, it is undeniable that it's been under environmental stress. It has never been more important to stand up for our Reef, a natural beauty which belongs to the world. However, in the name of "saving the Reef" social commentary has gone from one of pride and wonder to one of despair and doom. This negative public voice can have detrimental effects and derail its original good intentions which were to drive positive change.

Is the Great Barrier Reef Dying?

There has been a huge campaign to Fight for the Reef and to protect it for future generations. In amongst social outrage, it’s not uncommon to hear the phrase “the Reef is dead”, which is a damaging term if it’s taken literally.

The Great Barrier Reef is certainly not dead.

The Reef has always undergone changes and threats. Natural disasters and crown of thorns have long been giving the reef a run for her money. But now, the main threats facing the Great Barrier Reef are manmade.

Coastal development, land-based runoff, direct human use (such as illegal fishing), coal ports and the big one, climate change, are all threats which are testing the Reefs resilience like never before.

Like other coral reefs globally, the Great Barrier Reef is under pressure, however, it remains a vibrant, beautiful ecosystem of immense value to Australians and the world.

The threats are real, but let’s not forget, so is the Reefs ability to regenerate and evolve. Destruction and regeneration are the Reef’s two great capacities.

We are grateful to the people and community groups who are campaigning to save the Reef, they play an important role in bringing about positive change and conservation. However, what we are concerned about is the potential to mislead the public on what’s happening through misinterpretation by the media.

While the Reef does need protection, there is also a lot that can be celebrated and advocated for. Because when we stand FOR something, we are a stronger force.

“Iconic ecosystems like the Great Barrier Reef are much more than just a place, an economic incentive or a tourist attraction. Rather, our results suggest that they are a source of inspiration and pride, as well as a key contributor to personal identity that also encourages collective responsibility”. 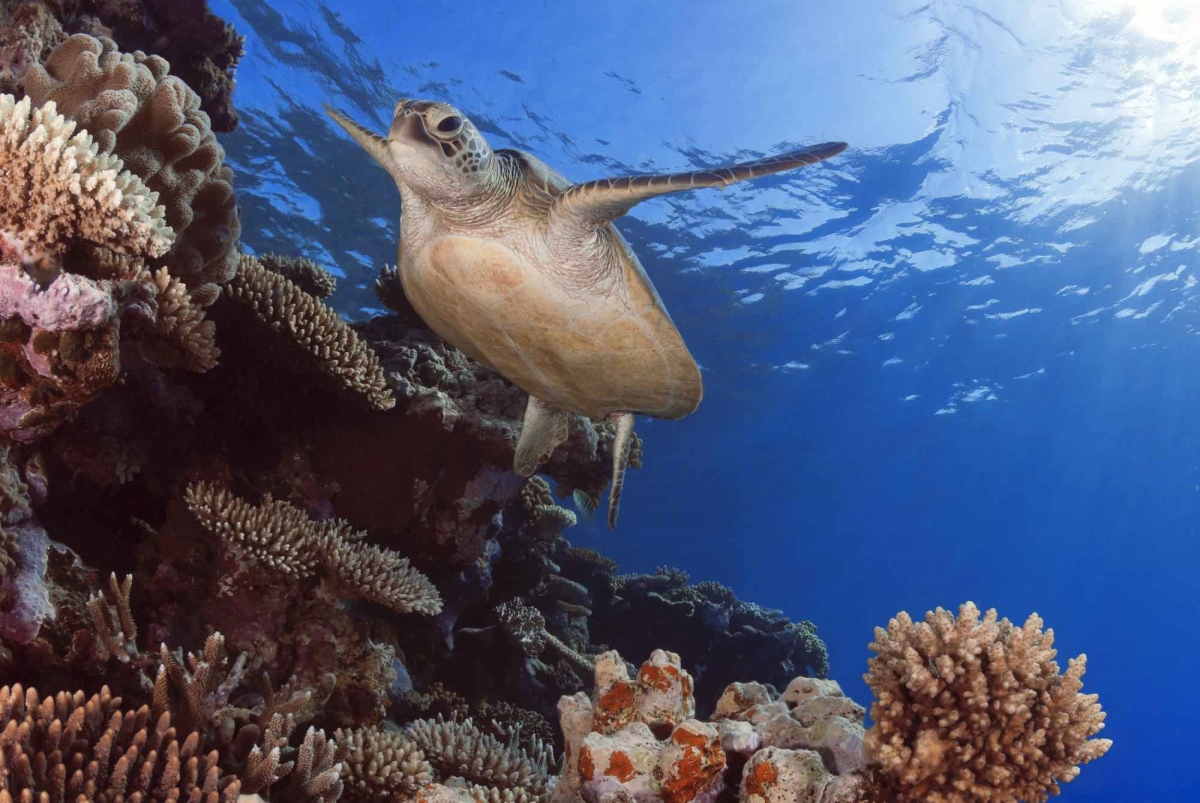 The best thing you can do for the Reef is to visit it.

When people visit the Great Barrier Reef they fall in love with its beauty and are inspired to advocate for it. Furthermore, by visiting the Reef individuals indirectly provide considerable support to the regional economy and put money into sustainable reef management.

Visitors to the Great Barrier reef want to protect it

Research shows that the strong connection tourists feel towards the Reef after visiting translates into positive intentions to help with its environmental issues.  This desire for beneficial action is an important outcome for the reef’s long term health.

Although there is a perception that travellers are a major contributor to damage on the reef, around 80% of all tourism activity occurs within just 7% of the Great Barrier Reef Marine Park.

Many experts are encouraging people to keep visiting the reef to fall in love with its beauty and to be inspired to advocate for it. While threatened, the Reef is indeed still there, still spectacular, and not beyond the point of saving.

“Apathy can be as much of a threat to the reef as climate change”.
Andy Ridley

Visitors contribute to the Reef's conservation through the environmental management charge which is collected by tourism operators on behalf of the Great Barrier Reef Marine Park Authority (GBRMPA). Last year, GBRMPA's total operating expenses were $52.5 million. Twenty per cent of this came from the $6.50 levy collected through the Marine Park fee.

GBRMPA also works with tourism operators on many initiatives that assist the ongoing protection of the Reef.

These include the Sightings Network, where tourism operators, crew and their guests report any unusual or significant sightings of marine life on the Reef. Often sightings of whale sharks or events such as coral spawning and algal blooms are reported by people enjoying a tourism activity. GBRMPA uses this information to assist in monitoring its management of the marine park.

The High Standard Tourism Program encourages tourism companies to adopt sustainable and responsible practices. As part of this program, GBRMPA rewards tourism businesses that are certified through Australia’s ECO Certification program (such as Whitsunday Rent A Yacht), based on the principles of economic, environmental and social sustainability. 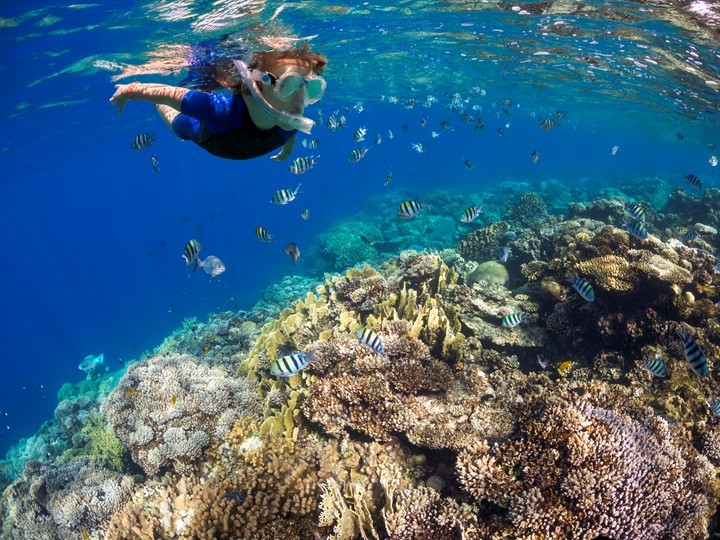 The Great Barrier Reef in The Whitsundays

Stretching 2,300 kilometres along the Queensland coastline from Bundaberg in the south to Cape York in the north and composed of more than 2,900 individual reefs and 900 islands, the Great Barrier Reef covers an area about the size of Japan.

In the Whitsundays, we are fortunate enough to have access to both the inner and outer reefs.

The Whitsunday islands are surrounded by fringing reefs and what we have been noticing, from charters feedback and local research, such as a recent coral survey by Johnny Gaskell, is that Whitsundays coral is showing some positive signs of regeneration and growth.

If you plan to visit the Whitsundays, we recommend you check out the 10 best snorkelling spots.

How was the Whitsundays affected by coral bleaching?

The 2016 bleaching impact was not equally distributed and southern sections of the Reef came through the event relatively unscathed. In the Whitsundays, unless you know what you're looking for, you're unlikely to notice any coral bleaching at all.

Will I be able to see healthy reefs in the Whitsundays?

Yes, thankfully the reefs in the Whitsundays are still very much alive and well. Visitors to the Whitsundays will be able to experience vibrant and colourful, corals and marine life.

One recent charterer from America was amazed by the live soft and hard corals he experienced while snorkelling amongst the islands. He said he didn't have much hope of seeing decent coral after reading media reports before travelling, but the corals in the Whitsundays were in fantastic condition, particularly compared to other international sailing destinations such as the Caribbean.

Despite being hit by the effects of climate change; the Great Barrier Reef remains one of the most spectacular natural habitats in the world. Parts of the Reef have been severely damaged and parts of the Reef are thriving, some areas are even bouncing back.

We believe it’s important to look at what’s working on the Reef and what we can cherish. This positive mindset can inspire people to be involved and take positive action.

When you see how beautiful something is, you are moved to protect it. So, we ask you, please come and see the stunning reefs found in the Whitsundays or any of the other locations along the Great Barrier Reef. All you have to do is go underwater and you’ll experience the vast beauty and marine life that still exists and is worth fighting for.

Join us, sail the Whitsundays and enjoy the freedom to explore