Sharks in the Whitsundays and being SharkSmart

When visiting the Whitsunday Islands, you're visiting a world-class natural environment which is home to sharks. While for some sharing the water with sharks can seem alarming, by being informed there is nothing to fear.

In recent years there has been some bad press around sharks in the Whitsundays.

While there were Whitsunday shark incidents in 2018 & early 2019, they were extremely unusual occurrence. Since these attacks, awareness campaigns and charterer education has been increased, to continually improve safety standards.

Part of what makes the Whitsundays so special is the balanced eco-systems & pristine environments they showcase. Therefore, education and shark awareness are key to safely enjoying this spectacular Australian environment.

In this post, we will outline what sharks you can expect in the Whitsundays, SharkSmart guidelines, what is being done and being aware of the sensationalised press around Whitsunday shark attacks. 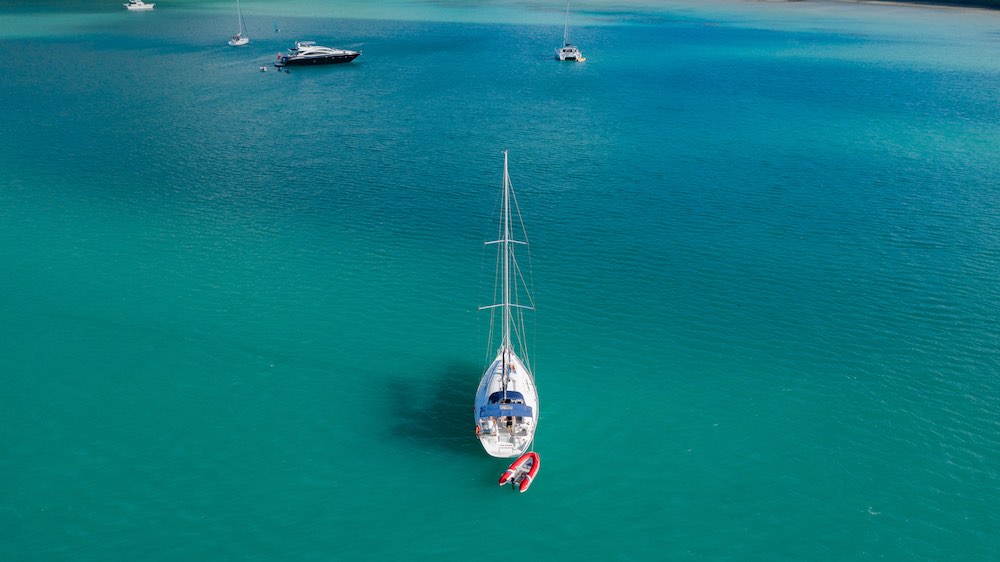 The Whitsunday Islands are part of the World Heritage Great Barrier Reef Marine Park, making them home to vast amounts of marine life including many species of shark.

The most common sharks around the Whitsunday islands are harmless reef sharks such as Whitetips, Blacktips and Wobbegongs (an aboriginal name meaning shaggy beard). It’s highly likely that when you meet a shark while snorkelling or diving, they will swim away.

Most commonly spotted in the shallows of Hill Inlet, Lemon sharks can appear scary, but they are not considered dangerous to humans provided they are given respect. You will see them from the beach at the northern end of Whitehaven.

Larger sharks such as Hammerhead, Bull and Tiger sharks are found in deeper waters, in particular around Cid Harbour. When left alone, these sharks are not a threat, however, they are considered the most dangerous sharks in the Whitsundays and swimming in their habitat should be avoided.

Stay away from swimming in deep waters and in particular never swim at Cid Harbour. Take note of the no swim signs in areas where larger sharks inhabit.

It’s unlikely you will encounter a more dangerous shark while snorkelling in the shallow fringing reefs around the Islands. All of the top snorkelling sites are considered low-risk shark areas.

Remember, sharks are afraid of humans and avoid human interaction when they can. 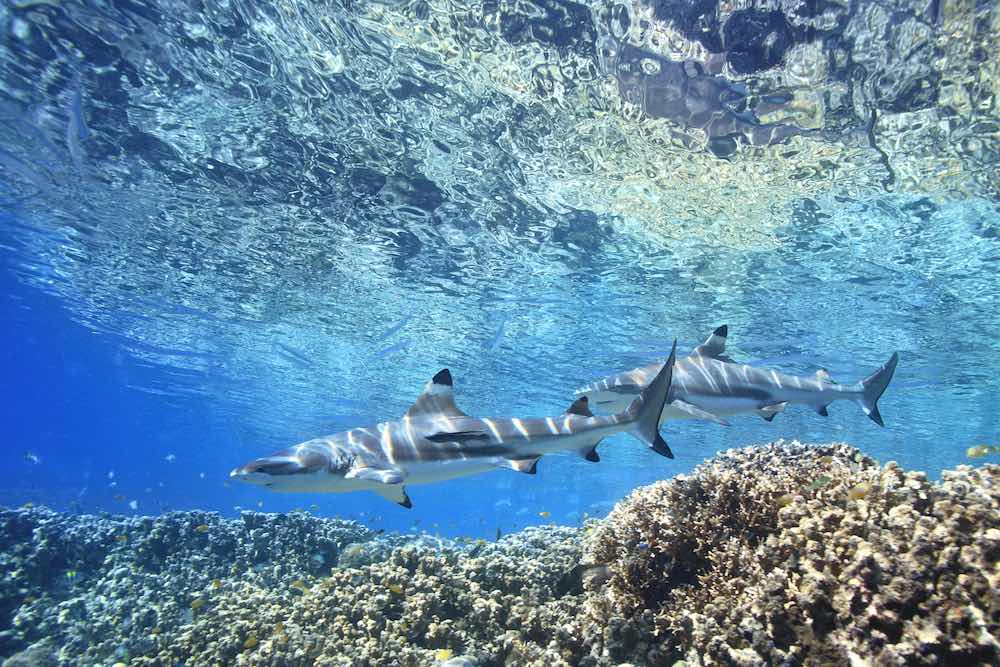 Shark attacks often receive negative press and stir public debate about drum lines, culling and environmental challenges. But despite there being an increase in shark attacks around Australia in recent years, facts and stats still illustrate that shark attacks are an infrequent occurrence.

Shark safety when you charter a yacht in the Whitsundays

Whitsunday Rent a Yacht informs our guests on being SharkSmart when they charter with us through emails, printed material on vessels and in-person during briefings.

With an understanding of no swim zones and best practices, our priority is keeping visitors safe so they can enjoy an unforgettable holiday experience in the world-class Whitsundays.

All guests are asked to watch this video from Reef Ecologic and take note of the specific guidelines outlined.

No Swim Zones and Signage around the Islands

"No Swimming" signs have been installed in locations where swimming, diving and snorkelling are dangerous. The 100 Magic Miles guide found on your vessel also outlines no swim zones with maps.

We suggest these safety guidelines for our guests.

The Australian Government have also provided information on how to be SharkSmart throughout Australia. 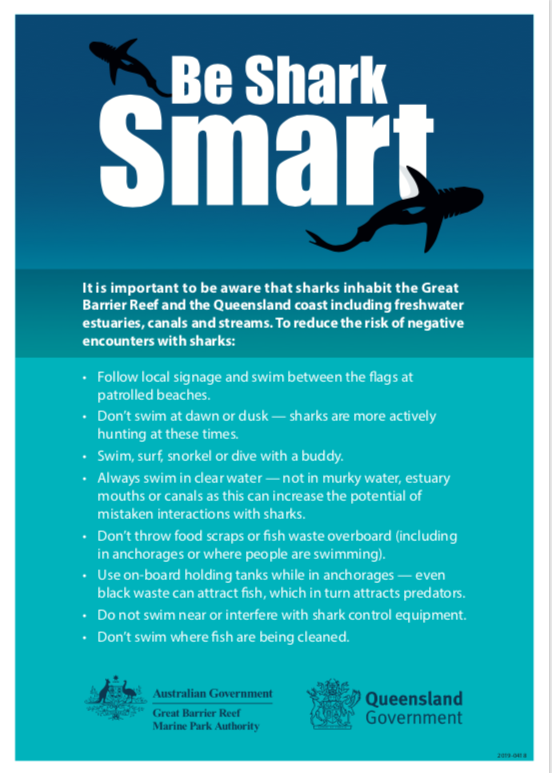 Cid Harbour is the known spot for shark attacks in the Whitsundays with an unusual cluster occurring in 2018.

The waters around Cid are deep and home to larger school fish which attract sharks. A range of different shark species are present in and around Cid Harbour, including tiger sharks, bull sharks, blacktip sharks, hammerhead sharks, spot tail sharks and tawny nurse sharks.

When visiting Cid, it’s important to note that you cannot swim under any circumstances. No swimming signs are seen around Cid Harbour to keep everyone safe.

Don’t let the presence of sharks deter you from visiting Cid Harbour; it's a fantastic overnight anchorage offering several protected coves and good fishing. Perhaps the biggest drawcard of visiting Cid is the excellent hike options on offer, one of which includes hiking to the infamous Whitsunday Peak Track to the highest view in the islands. 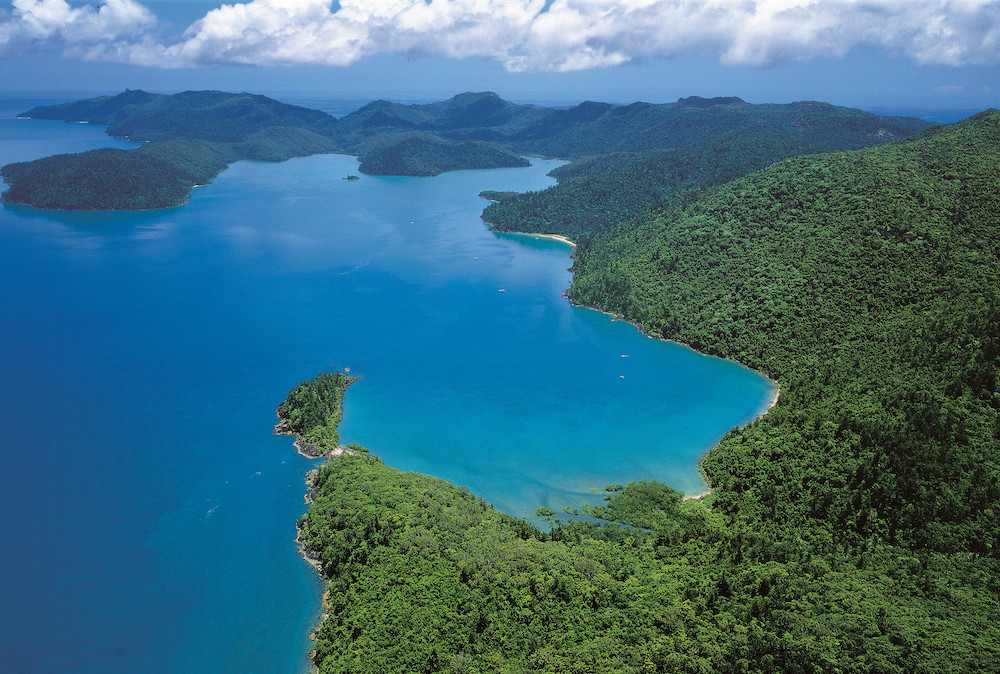 Local tourism operators continue to work with the Department of Agriculture & Fisheries, the Australian Institute of Marine Science (AIMS) and James Cook University (JCU) to investigate shark populations and behaviours in the Whitsundays.

Recently, Whitsunday Rent a Yacht partnered with Reef Ecologic who are researching visitor behaviour and its influence on shark interactions. Research has included surveying guests after their charter and keeping track of the food waste coming off vessels to monitor whether scraps are being thrown overboard.

Whitsunday Rent a Yacht has decided against using the electronic shark deterrent devices on our boats. We believe that technology needs more testing to be a safety device that would fit our standards.

When it comes to keeping guests safe, education is a more powerful tool, rather than the complacency which may come about from installing electronic shark deterrents.

We strongly recommend reading this fantastic article from Australian Geographic called The Truth behind the Whitsundays shark encounters.

The article highlights how reporting of the 2018 Cid Harbour shark attacks was misleading. With three experts agreeing that it’s not uncommon to have negative media attention after a shark-human interaction, but the reportage surrounding the Cid Harbour attacks was “by far the worst”.

Daryl McPhee, an expert in unprovoked shark bites from Bond University, shares the press was “a perfect example of what not to do. Everything that could go wrong in terms of media reporting happened in that situation. Local reports became global, and that will undoubtedly be blamed for an impact on tourism, exacerbating the situation.”

Barbara Wueringer, a zoologist and founder of Sharks and Rays Australia, says

“I personally assumed based on the reportage that it was a great place for snorkelling, but it sounds like that’s not the case at all. They made it sound like where the person was snorkelling was perfect for that kind of water-based activities. Still, it wasn't." Also “many of the articles written about the event included images of popular tourist destinations of the Whitsundays where the attack did not take place”.

Use discretion and dig a little deeper to avoid sensationalist reporting around shark attacks. Reporting shark encounters is vital for awareness but not for miss-representing facts and creating fear where it’s not needed.

Negative Whitsunday shark incidents are likely a case of mistaken identity for a shark's usual prey and guests not being SharkSmart.

If you're planning a bareboat charter around the Whitsundays, the best way to avoid a negative shark encounter is to educate yourself so you can make safe decisions, giving sharks space and the respect they need.

When visiting the Whitsunday Islands, you're visiting a world-class natural environment which is home to sharks, however, by being informed Whitsunday sharks are nothing to fear.

Join us in the Whitsundays and enjoy the freedom to explore