A Guide to Whale Watching in The Whitsundays

Humpback Whales migrate to the Whitsundays Islands to have their babies making the shelterd, tropical waters of Whitsundays one of the best places in the world for whale watching.

Whale watching season in the Whitsundays runs from June until September, conveniently lapping into the school holidays.

The season starts when Humpback whales migrate north from Antarctica to breed and give birth in the warm tropical waters of the Whitsundays. When the calves are strong enough, the whales commence the return trip south towards the end of September and the beginning of October.

There are many ways to see the whales amongst the Whitsunday Islands, with many tours operating from Airlie Beach and Hamilton Island. But if you ask us, the best place to whale watch, it's from a private charter yacht!

In this post, we outline a guide to whale watching in The Whitsundays, no matter how you choose to see them. And we'll give you some handy tips if you're lucky enough to cruise the Whitsundays at this special time of the year.

How to see whales in The Whitsundays

There are many ways to see whales during The Whitsundays’ whale season. You can view them from an island such as Hamilton, join a day or overnight tour group through an agent like Sailing Whitsundays or you can see them during your bareboating holiday.

The Whitsundays does have a reputation as “the Humpback Highway”, so your chances of seeing whales is extremely high.

A bareboat holiday ensuring you’re in the right place at the right time for a one-on-one whale encounter. It’s not only thrilling to see the whales when you’re on your sailing holiday, but it’s an absolute privilege to see them with your family and friends from your own private coat.

When one of the fifth largest creatures on the planet decides it's curious about you and approaches your yacht, it’s an interaction you will never forget.

Avoid the crowds
Being on your own bareboat means there are no crowds to jostle with when these spectacular marine mammals decide to put on a show. There are other places in Australia where you can view the whales, such as Hervey Bay, but sailing in the Whitsundays offers an opportunity to experience them away from tons of tourists.

Experience whales at night
You will often spot the whales as you make your way around the islands and if you’re lucky, from the comfort of certain anchorages. Hearing whale song through the hull of your charter boat at night is one of the most magical experiences imaginable

You will be out sailing for several days, so it’s likely you will get many opportunities to take great photos.  Your charter’s deck is the perfect vantage point to take photos from and you can move around freely depending on where the whales are heading.

Regular sighting
There is no pressure to see whales immediately when you are on your own yacht charter. You can go at your own pace and enjoy the many opportunities you’ll have to see whales as you cruise The Whitsundays. 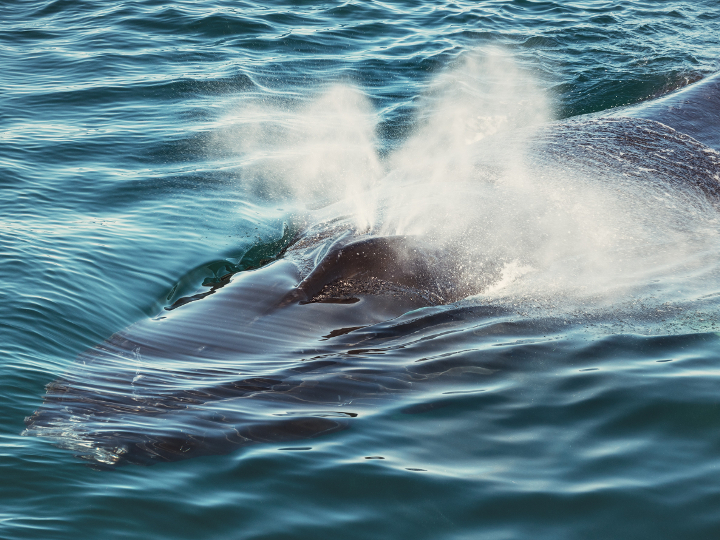 The behaviour to look out for when whale watching

Breaching
There is nothing more impressive than seeing a 40-tonne marine mammal launching itself out of the water and crashing back down to the surface with an almighty splash.

Spy Hopping
A curious humpback will raise its head vertically out of the water to look at you and establish orientation with the shore.

Fin slaps
It is common to see whales slapping their fins and flukes on the surface of the water, as many as 30 times in five minutes.

Blowholes
Whales blow excess water several metres into the air as they rise to the surface to breathe. The sight and sound of the spray will often initially alert you to their presence.

Tail flukes
Whales arch their backs before they dive and when a whale dives deep its tail will appear vertically above the water before slipping gracefully below the surface of the sea.

Interesting facts about the whales in the Whitsundays

Perhaps the most famous whale seen in the Whitsundays is Migaloo, a pure white adult male humpback, whose name means ‘white fella’ in some Aboriginal languages.

The hyper-pigmented white skin of Mingaloo is so rare he has been given extra protection by the Queensland and Commonwealth governments and sometimes has his own police escort. Mingaloo just turned 30, considering Humpbacks are believed to live up to 100 years old we will probably be seeing him for a long time. You can more about Mondaloo’s life in this ABC news article

Until recently Mingaloo was thought to be the only white whale in the world, however, in September 2011 an all-white calf emerged right here in the Whitsundays.

Named through a local competition after the white sand at Chalkie’s Beach, our humpback calf ‘Chalkie’ was first spotted by local fisherman Wayne Fewings in 2011. He/she is said to have a signature black spot on his tail and has been making regular appearances since 2015.

For many people, seeing a whale in its natural environment is a once-in-a-lifetime experience. Getting up close to whales can be very tempting, so to minimise risks such as inadvertently separating mothers and calves regulations are in place.

The general rule is to keep your distance and let the whales approach you.

Be aware that most of the area around the Whitsunday Islands is a whale protection area.
This means:

If you’re lucky enough to have whales come up to your boat to check you out, please ensure that you switch off your engines and do not follow or chase the whales.

Areas in the Whitsundays have been zoned into ‘Caution’ and ‘No Approach’.

The caution zone is 300 metres surrounding the whale in which boats cannot travel at speeds of more than six knots or create a wake.

The no approach zone covers an area of 100 metres around the whale and 300 metres in front and behind.

These distances are increased to 500 metres for white whales.

If a whale comes inside the no approach zone you must stop the boat and switch the engines off, or withdraw at a speed less than six knots.

And remember, as the Department of Environment and Heritage Protection states:
“A fully loaded semi-trailer weighs 36 tonnes. A full-grown humpback whale weighs up to 45 tonnes. You wouldn’t stand in front of a moving semi-trailer so why would you put your boat in the way of a whale?”

Whale-watching guidelines are supplied with our vessels in the season. You will also find copies of the guidelines in a copy of 100 Magic Miles which lives on your charter boat.

While it’s easy to get bogged down in the rules, once you are out there seeing these magnificent creatures you will understand why they deserve so much protection and respect.

Experiencing Whale watching in the Whitsundays from your own private charter is the ultimate holiday. If you want to start planning for your bareboat adventure to coincide with the 2020 whale season in The Whitsundays, please get in touch.

View our specials and packages