Lindeman Island: The best kept secret in the Whitsundays

Lindeman Island is perfect for those looking for seclusion, secret beaches, birdlife, hikes and an island adventure off the beaten path.

Lindeman Island is a hidden gem and well worth visiting if you're interested in exploring an island "off the beaten path".

Located in the southern part of the Cumberland Island group, the first resort to be established in the Whitsundays, back in 1923, was on Lindeman, a testament to the islands beauty. Today, it showcases approximately 700 hectares of World Heritage National parkland.

Since 2012 Lindeman Island has not had an operational resort. While developments are underway to refurbish the old Club Med with an opening predicted in 2022, the island remains open for exploration if you're cruising the Whitsundays on a yacht.

In this post, we'll go through how to visit Lindeman Island and neighbouring Shaw Island while on a bareboat yacht charter. We’ll also cover the main natural attractions, including the best beaches, fishing, hikes and snorkelling. 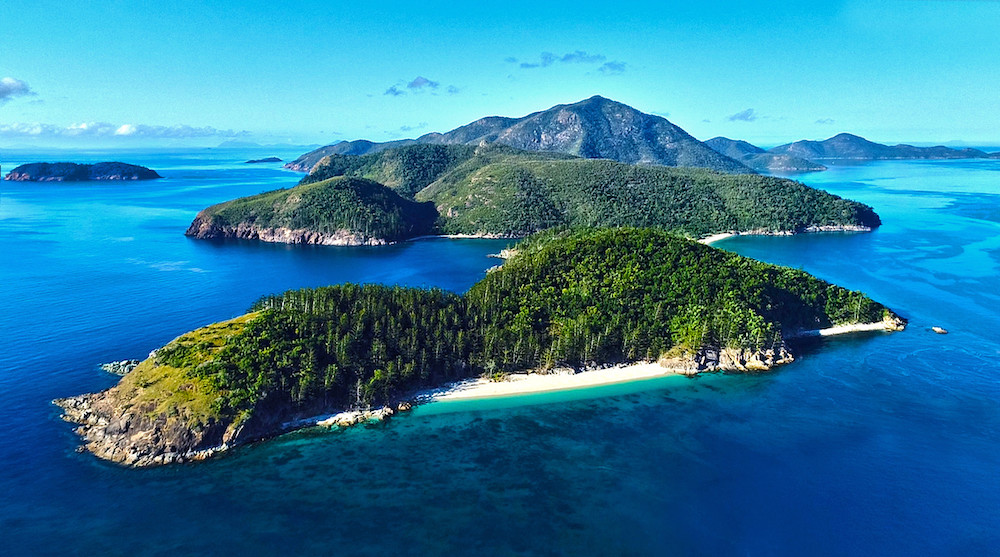 Where is Lindeman Island?

Lindeman Island is part of the Cumberland group, including nearby Seaforth, Thomas and Shaw islands. Lindeman is the most southern island in the group.

Those interested in hiking will enjoy Lineman Island's unique perspective. From the top of Mt Oldfield, 212m above sea level, a spectacular 360-degree view stretches over Hamilton, Hamilton, Whitsunday, and Haslewood Islands.

Charter limits for Whitsunday Rent a Yacht allow boats as far south as the Lindeman passage. Meaning bareboat guests can go all around Lindeman and along the northern/western side of Shaw Island.

There are some excellent overnight anchorage options around Lindeman in northerly winds.

We usually suggest Lineman to people on at least a 7-night charter, as it's a bit away from all the other “go-to” spots around the islands. If you've sailed the Whitsundays before, then we will defiantly nudge you in the direction of Lindeman!

Beaches and Anchorages on Lindeman Island

Those cruising the Whitsundays by boat can anchor out the front of the old resort using the old jetty.

However, when writing this post in early 2022, we do not recommend our bareboat charter guests visit the resort side of Lindeman Island. Neck and Plantation Bay are the best places to anchor.

Plantation Bay is our pick for the best swimming spot on Lindeman Island. The beach is beautiful and sandy, with reefs worth snorkelling in clear conditions, although the coral isn’t as attractive as it is at Gap Beach.

Plantation Bay is protected from most winds except the West and South-west.

There's an unmaintained track from the centre of the beach, which takes you to the deserted "adventure playground" which previously belonged to the old Club Med resort.

The name plantation bay comes from when this area used to be an orchard and vegetable garden for the resort.

Boat Port, the north-western bay of Lindeman Island, is well protected from the prevailing south-easterly breeze.

Expect a long row into the beach from your anchorage. At low tide, the sand flat goes a long way out (300 m) which can pose a challenge with leaving your dingy in an accessible location considering the dramatic tide changes. For example, you could easily find yourself marooned, waiting for water to return to the bay for quite some time.

If in doubt, take the Kayak ashore to explore several beautiful beaches without needing to worry about where you left the dinghy.

Secret spot tip: If you're up for a mini-adventure, walk around the rocks on the North end and find a private white sandy beach with a sandspit reaching towards Little Lindeman Island. Enjoy the views of the dramatic Pentecost Island in the background.

Anchor on the northern side of Seaforth Island for shelter from south-east winds.

Seaforth is a beautiful secluded National Park island with exciting rock formations & rock orchids. Enjoy the picnic area and short trail through the bush to the beach across the northeast arm of the Island.

Queen Elizabeth and the Duke of Edinburgh visited Seaforth Island to enjoy a Whitsunday beach in privacy.

Gap Beach lies between two high pieces of land at either end. Protected from West and all southerly winds, Gap Beach can get a little rolly at times. Check-in at your radio schedule call to check the right conditions for anchoring.

A fantastic spot for snorkelling and oystering, there are also beautiful views northwards towards Pentecost and the main islands of Whitsundays.

The beach itself is pebbly, so not a pristine sandy spot for sunbaking. Adventure lovers will enjoy exploring the rock pools and clambering the rock formations to the right off the beach.

Located on the North-west side of Shaw Island, Neck Bay is a remote spot protected from south & east winds. Neck Bay is the most southerly anchorage within Whitsunday Rent a Yachts charter limits.

Be mindful of the tidal stream created between Dalwood Point on Lindeman Island and Shaw Island when anchoring here. It's best to anchor as close into Neck Bay as possible while being mindful of the reef (refer to the coy of 100 Magin Miles aboard your vessel).

The area is suitable for swimming, fishing, snorkelling, kayaking and camping. The sandspit is a natural feature of this bay.

The name Neck Bay is due to the area resting on an old vegetated sand spit between what was once two islands. You can walk the trail inland from the Neck Bay beach, and it won't take you long to reach the opposite coast, where you'll see a completely different coastline.

Burning Point is protected winds coming from the South and East, it looks over towards Lindeman Island. Be wary of the fringing reef near the beach, making the island inaccessible at low tide. 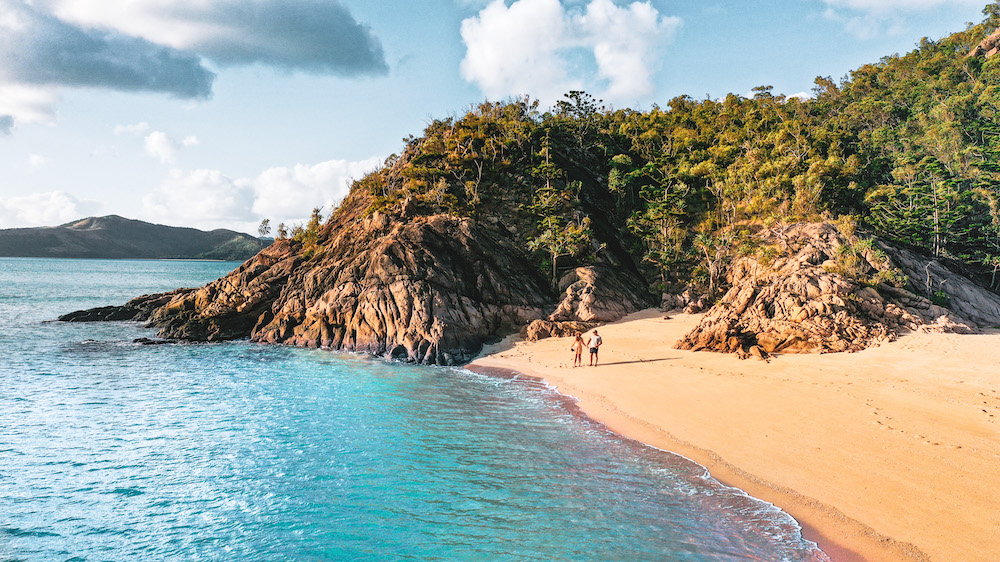 Things to do on Lindeman Island

We’ve heard from serious sea kayakers that there are several beaches around Lindeman Island that don't have trails leading to them and can only be accessed by Kayak. Sounds interesting if you’re an explorer!

Any beaches and bays available for anchorage are also great places to explore by Kayak. The birdlife around Lindeman is impressive, and those with kayaks will have a chance to observe up close.

The jetty near the resort is a popular fishing location—also, the rocks around Gap Beach.

In whale season, humpback whales can often be seen from the shore of Gap Beach, a sight not to be forgotten. Dolphins are also frequently spotted playing on the shoreline.

Lindeman Island has seven beautiful beaches, which are all perfect for relaxing in solitude. The Island is sheltered from the trade winds by larger Shaw Island, located 3km to the south-east across Kennedy Sound; hence waves are usually low to calm. The best swimming is toward high tide when the flats are covered.

Gap Beach is the best snorkelling spot, with colourful reefs and abundant marine life near the shore.

Twitchers will love birdwatching over 90 species of birds darting around the Island. The wetlands are abundant, with resident forest kingfishers & swamp hens, and the shy bush stone-curlews are spotted around the beaches.

From October to March, thousands of waders migrate to Lindeman to nest. Some boating restrictions apply during this period—see Take care of nesting seabirds for details.

Lindeman Island is primarily a National Park and hence, a bushwalker’s dream island, with 19kms walking trails throughout untouched bushland. Many of the tracks are currently unmaintained, but this will undoubtedly change with the new resort development.

At this time, the only walk is being maintained by Queensland National Parks & Wildlife is the one to Mt Oldfield.

The track to Mt Oldfield is the most popular, maintained trail on Linderman Island. Depart from the airport hut near the resort.

This walk involves a steady climb and features some of the most diverse vegetation on the Island. You will be rewarded with sweeping views northwards to Hamilton and Whitsunday Islands, westwards to the Conway Peninsula on the mainland, and southwards over Shaw Island. Some say the ascent to Mount Oldfield offers some of the best 360-degree views of the Whitsundays you'll see.

On the northwest side of Lindeman Island, you will find Boat Port (see anchorages section for tips on boat access). Take the trail through the rainforest and grassland to more spectacular views from the camping area.

Coconut Beach is a secluded sandy bay located on the western side of the Island. Take the trail through the eucalypt forest and up to the resort dam, which is an excellent place for birdlife.

Winding through eucalypt forest and dry rainforest, this track emerges at a pebbly beach and rockpools. Enjoy spectacular views of nearby Pentecost Island.

During winter, the walk down to Gap Beach can feature clouds of butterflies.

So there you have it, a summary of why Lindeman Island is, in our opinion, completely underrated and totally worth visiting. When in the briefing stages of your bareboat charter, chat to your trainer about adding Lindeman Island to your itinerary; we promise you won't be disappointed.

Sail the Whitsundays, visit Lindeman Island and enjoy the freedom to explore.
Contact us 1800 075 000 or sales@rentayacht.com.au