Discover these hidden gems when you cruise the Whitsundays

Cruise the Whitsundays on a yacht or catamaran and discover secluded island beaches and secret coves away from crowds.

When you hire a bareboat, you have the freedom to choose where you cruise in the Whitsundays, with the opportunity to explore outside the popular tourist trails.

There are some bucket list sights in the Whitsundays, Whitehaven Beach, the Hill Inlet Lookout and Hamilton Island being the top three. But once you tick these “must-see” attractions off your itinerary, consider cruising to islands and beaches that are off the beaten path. 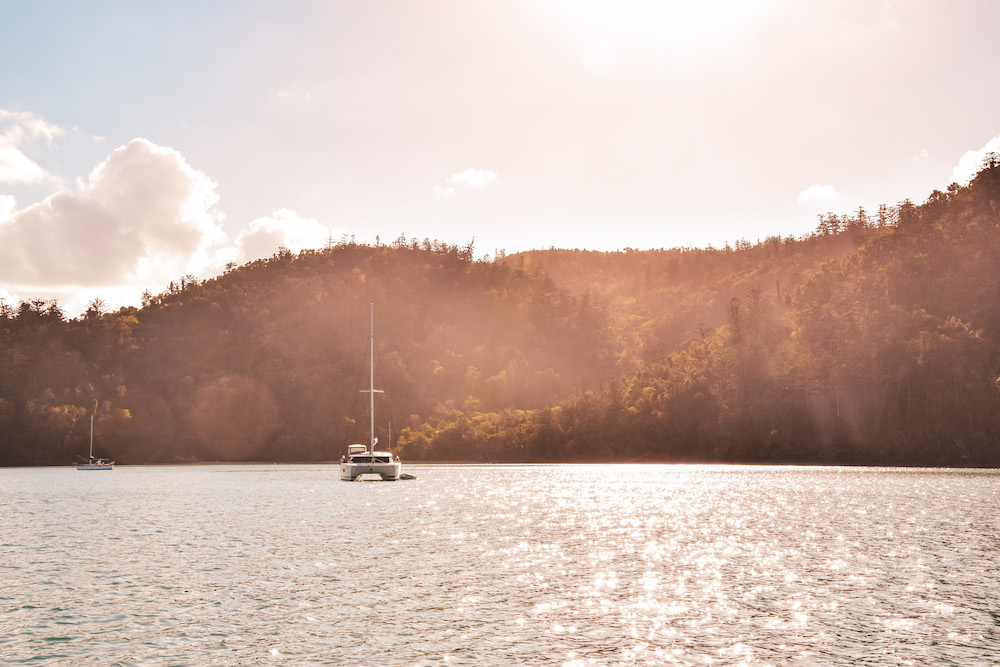 Discover these secret spots when you cruise the Whitsundays

As with all planning, when you sail the Whitsundays on a bareboat, you need to check in with the operations team to ensure that where you are going is safe and favourable for the weather conditions. Some of these hidden gems require a good understanding of tides and navigation.

Turtle Bay is on the south side of Whitsunday Island. The Whitsunday winds are often from the South East, which means that Turtle Bay is rarely visited; it's protected from North, North West and North East winds.

If the winds are favourable, you won’t regret going to explore the beautiful beach within Turtle Bay. The fringing reefs are also fantastic to snorkel, and of course, there are turtles and some local manta rays to spot.

Turtle Bay is just around the corner from Whitehaven Beach. Consider making Turtle Bay your anchorage instead of Tongue Bay or Whitehaven, where the mainland tours and visitors anchor.

Many turtles live on the beach in Turtle Bay from October to December. Marine Park Restriction apply.

Esk Island is a very small island that sits opposite Hill Inlet. It's covered in Hoop Pines and surrounded by small cliffs and coves.

We recommend only accessing Esk Island in light wind conditions; it's sheltered in light Southeasterly winds. Two moorings have been installed near the coral spit on the western side.

Explore the quaint secret bays on the northern and southern sides of the island and enjoy snorkelling the area.

If the weather is right, you can actually take your dinghy across from Esk Island into Hill Inlet.

Lindeman Island has about 700 hectares of World Heritage national parkland.

Plantation Bay is a beautiful overnight anchorage, protected from most winds except the West and South-west. The beach is arguably the best on Lindeman Island, with Gap Beach a close contender -  a fantastic spot for snorkelling and oystering.

Look for the unmarked track from Plantation Beach, which leads to an abandoned adventure playground!

You'll find Maureen's Cove within the north of the Whitsunday islands cruising limits on Hook Island. Maureen’s is the next bay to the east of Butterfly Bay, and, like Butterfly, it’s a less-busy snorkelling hot spot.

Keep an eye out for the reef protection buoys. A mooring is the best option, Whitsunday Rent a Yacht prefer that our guests don't drop the anchor at Maureen's Cove.

While snorkelling, you're likely to see some of the best coral on show in the Whitsundays, including large gorgonian fans near the point. There are two dive sites at the back of the bay and one known as “Boulders” on the eastern edge, which is also the best spot for snorkelling.

Maureen’s Cove also makes an excellent spot for camping or a picnic. Learn more about camping at Maureen's cove on the Qld parks website.

Enjoy uninterrupted views over a spectacular fringing reef to the Coral Sea. A great spot to watch for white-bellied sea eagles, lace monitors and brush turkeys.

Those who understand tidal effects can consider visiting Sandy Bay. The Bay is well protected, with several moorings available. Please note that Sandy Bay is mooring only and be aware of the back current that run south from Ker Point.

Located on the southwest side of South Molle Island, the beach is a beautiful isolated sandy escape. Sandy Bay is connected to some fantastic walking trails around South Molle.

There’s a camping area within Sandy Bay with toilets and picnic tables. Pack a lunch and spend the day in the shade of the South Molle’s delightful coastal forests in-between dips.

Border Island sits in the far west of the cruising zone for bareboat charter visitors to the Whitsundays. It's not on the way to any significant Whitsunday attractions, making it a great place to explore if you want to get off the beaten path.

Cateran Bay is the best anchorage on Border Island; it's protected from east, South and South-West winds. Surrounded by cliffs, the bay feels cosy and idyllic with its crystal clear turquoise water.

The bay is protected from trade winds and offers excellent snorkelling on the northern side. Reef protection buoys have been installed to prevent damage to the fringing reef.

Take the hike up to the grassy island ridge and beyond to Mosstrooper Peak with its 360-degree views of the area.

With its eucalypt forest and lush slopes, this remote and private bay on Border Island is a designated green zone. Put it on your itinerary if you’re looking for a romantic or secluded spot.

Around the corner from the popular Chalkies Beach on Haselwood Island is the lovely Windy Bay. The sand is very close to the silicon white sand you'll find on Chalkies and Whitehaven, yet it's hardly ever visited.

Look for the hiking trail you can take from the north-west corner of the bay over the saddle of the island to White Beach. White Beach is strictly a no go zone for boats, so this hike is great for those who want to explore a remote corner of the Whitsundays.

Windy Bay is a large area where anchoring is possible. It's protected from east, south-east, south and south-west winds.

There's a small sand beach along the coast towards Pallion Point which is a great spot to snorkel from. Windy Bay is a great fishing location!

Neck Bay is on the North-West side of Shaw Island; it's the most southerly point within the cruising limits for bareboat charters.

The name Neck Bay comes from the narrow spit which makes the bay. From Neck Bay, you can walk from one side of Shaw Island to the other, experiencing a rocky coastline of the opposite side, which completely contrasts the sandy shores of Neck Bay.

It's possible to anchor overnight at Neck Bay with protections from North-East, East, South-East and South winds. Anchor close to the bay to avoid the strong tidal stream in the area. Access the Neck Bay beach from a mid-tide.

We recommend talking to our head office during your daily radio calls or chatting with your briefer before planning to anchor at Neck Bay to ensure you understand the tidal conditions in the area.

Shaw Island is an excellent spot for bird watchers. Please note that each year from 1 October to 31 March, access restrictions apply east of Burning Point to protect nesting sea birds.

Join us to cruise the Whitsundays and discover your hidden gems.